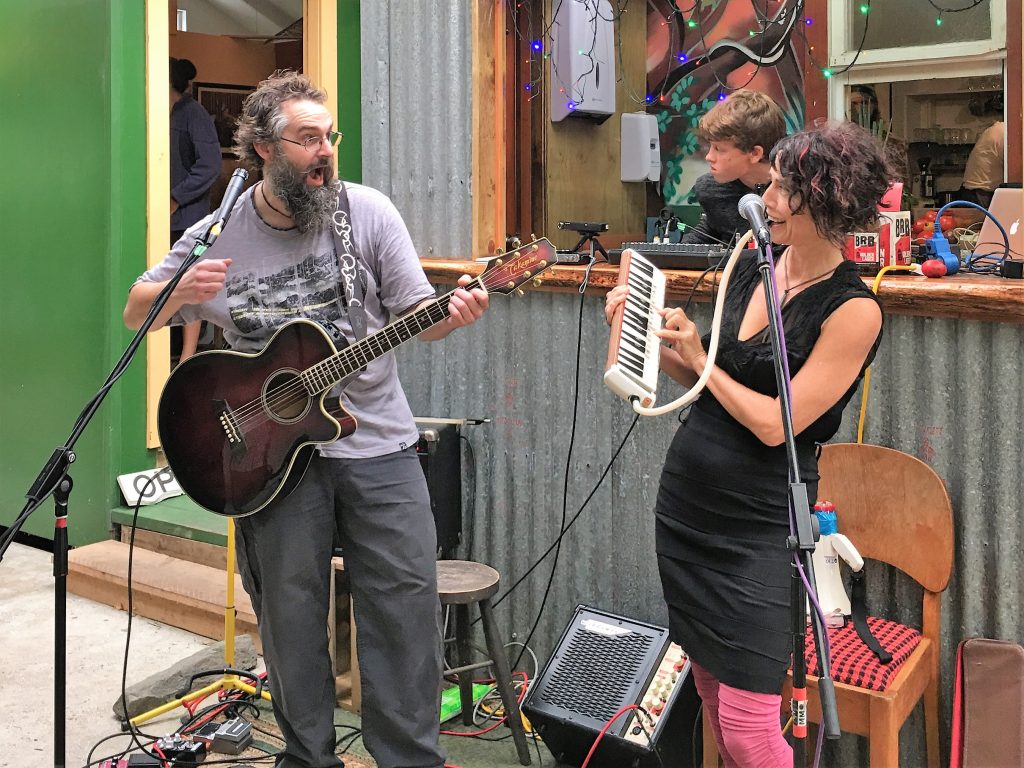 In The Domestics we play a number of different instruments and, which sometimes present us with a problem – there’s only two of us and we don’t possess enough hands to play all the things we want to play for our songs. We find ourselves reluctantly resorting to backing tracks and loopers to creatively fill out our music in the way we want. In addition we have to choose our set quite carefully to minimise the disruption from too many instrument changes.

Larissa’s Melodihorn instrument (aka “the blowy thing”) is a prominent feature in our music and is often found adding it’s melancholic melodies in instrumental sections. Andy is an accomplished ‘cellist having been involved through his school and university years. He worked hard to achieve his grade 8 cello and went on to enjoy music in various groups and orchestras which proved an extremely fruitful source of girlfriends.

His acoustic cello was found in an antique shop in England over 35 years ago – it was in a poor state – no strings or foot, or sound post, but a trip to the luthier resulted in a fine German instrument dating back to the mid 19th century with a beautiful full tone which enabled him to continue his study and go onto achieve his grade 8.

On leaving university Andy found that there was no longer any opportunity or available time to play in groups and the cello was put to one side in favour of the guitar and it wasn’t until Larissa came on the scene 25 years later that he was persuaded to start playing it again – it has now become a staple part of The Domestic’s sound.

At the beginning of 2018, Andy had the opportunity to acquire an electric cello which is what we tend to use in our gigs.

Oh dear, oh dear, oh dear … this is a touchy subject … it didn’t take long for Larissa to utter the immortal words ‘why do you need another guitar’ to which Andy of course had a perfectly satisfactory answer – but needless to say the desired guitar (a superb and quite rare example of a 12-string mini Maton as it happens) was not acquired. Some would say that Andy has too many guitars – but this is not the case. Each one has a purpose and a story and can’t possibly be replaced or passed on (guess who’s writing this article)!

Larissa has one guitar – a nice Squire telecaster which sounds amazing; plays nicely and has even been used by Andy in gigs!

Andy has never counted his guitars (it’s much safer that way) but has a number of favorites among the instruments that he owns. His ‘go-to acoustic is a quirky Fylde Othello guitar which has a truss rod that’s too long; a sound hole that’s not quite in the middle; frets that have a flat and not curved profile and a beautiful dark cedar top with unusually bracing! He’s proudly owned it for about 30 years and bought it from a music shop he was working in as a student. It’s just had a full makeover and received a re-profiled fingerboard and frets and a super new pickup system installed.

Hat’s off to Warren at Audio Zephyr – he’s breathed a new lease of life into my beloved Fylde Othello guitar. It’s my favorite guitar, having owned this guitar for nearly thirty years and it has been with me throughout my whole guitar playing career just about. I first saw this guitar in Pink Noise – the music shop in Gravesend (UK) that I was working in as a student. It was used and belonged to the brother of one of the shop owners. It played so nicely and was such great price but still rather a lot of money for me at the time. I persuaded myself to buy it (as you do). A few years later I had the frets redressed and a Gibson slimline pickup installed by a somewhat average luthier in Southampton. I came to really love this guitar – it’s amazingly loud and lovely tone, but it was many years later I realised how quirky it is – the sound hole isn’t even central!

The Fylde has been played regularly over the years, but more recently the action was becoming more and more unplayable and it had been sitting in the corner for a while not being played. I was worried that there was something not right about the truss rod and that it was going to cost me a small fortune if I took it in. However, with such a precious thing as this that has been part of my life for so long, I’ve develop a deep almost spiritual connection with it and feel the responsibility to keep it well looked after and played. So I ‘bit the bullet’ and took it in for Warren to look at.

He spend a good long time umming and ahhring over this when he first saw it and spent ages pondering. He noticed the flatness of the neck, the quirky neck joint – the unusual body bracing – all things I’d never realised before. He well and truly turned his nose up at the slimline pickup under the bridge! But when he said that it needed a neck reset, but that he wasn’t prepared to do it … my heart sank. Fortunately he was able to come up with another solution. So it’s now got a brand new bone nut, mammoth tusk bridge (yes, you read that right – and it still smells of peat bogs!), buffalo horn bridge pins and a new K&K pickup system – also a straight and properly radiused neck with brand new frets! Yay – my beautiful Fylde sounds and plays like a million dollars! Many, many thanks to Warren for his efforts!

Here’s Warrens own write up of the project:

‘This early Fylde acoustic needed a neck reset etc… however because the original neck fitting method would be a bit of an unknown I was reluctant to attempt it… luckily it had an overly thick fingerboard (with almost no radius and a rising fingerboard tongue) and needed re-fretting, so during the leveling and radiusing to 20″ I removed about 2mm more at the nut end and almost none at the body fret and carrying on leveling out the rising tongue, giving us a new line of sight angle from the nut up to the bridge, the same as what a neck set would have given us. Then once fretted we had almost perfect alignment allowing reasonable saddle height and low action… not bad considering it came in with horrible action and almost no saddle height!!’ 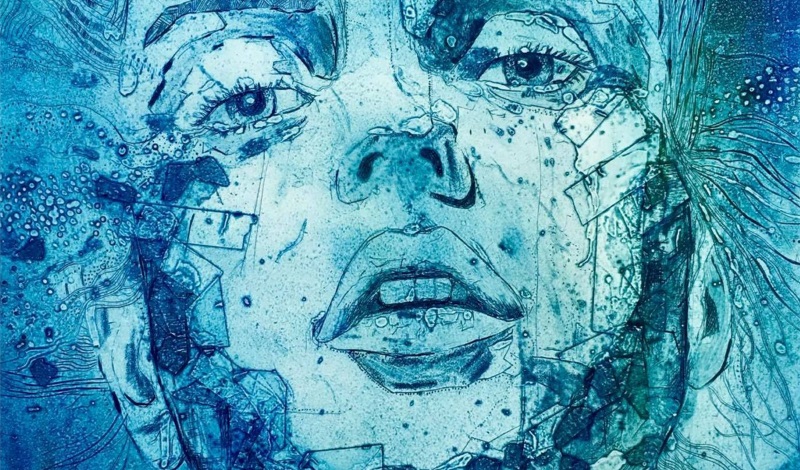 Andy had a chance encounter at Ellamy Studios with the mysterious Armchair Insomniacs and ended up contributing some guitaring to a few tracks on their new self-titled album. So pleased to have my talents etched on real vinyl at last! About AI (in their words!):
“No one is quite sure who they are. What we do know is they are multi-dimensional beings, a collective, surfing a harmonic universe of sound, light and love. In a multi-dimensional universe, vibration is everything. Armchair Insomniacs give form to that vibration – meditations on themes, dreams, hopes and possibilities – through word and sound, appearing in that space between awake and asleep. Currently transmitting from New Zealand, this debut album finds that humanity is part of that vibration and the songs are a journey through that humanity.”

Andy is playing on the tracks ‘Free Love’ and ‘Sail On’ 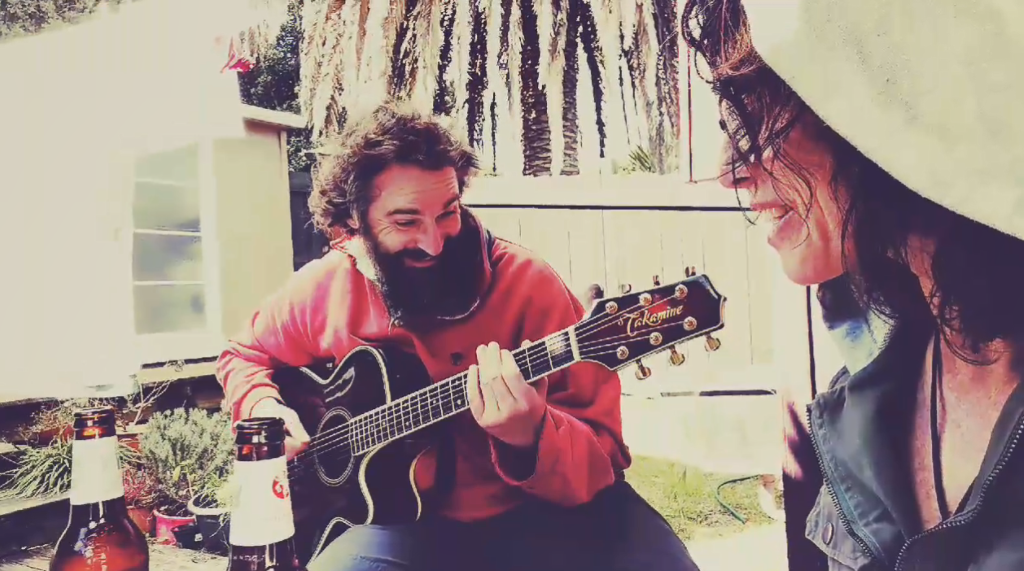 A sneaky peak into The Domestics’ sacred processes of birthing our new song – ‘Change Your Life’. We’re looking forward to adding this to our repertoire. We will be performing this one at our next gig which we think will be at the Artworks Theater at the end of June!

Andy’s hair is a complete mess and Larissa is stealing his beer! The washing has been hung out and we have cheese and crackers – all set for a practice – and a bit of fun!

We came up with this idea for a new song while we were away on our summer holidays back in February. The riff for the chorus is powerful and energised making full use of the drop-d tuning on the guitar to give a massive sound. Larissa’s intuitive lyric’s defined the idea for the song and before long the chorus was fleshed out. However we got a bit stuck there and the song has sat largely untouched since then. Last weekend we were working on new material and Andy came up with another cool riff – also in drop-d tuning with a ‘slide’ feel to it and it wasn’t long before we recognised that it would work as the verse for ‘Change Your Life’ and having married the two together we found that the words flowed from there.

We’ve got the song structure now, including a bridge and even an intro. Most of the words are there, although they’re subject to change based on some forthcoming negotiations … So now to apply some polish to this rough hewn creation – perhaps some looped drums and less mistakes! We thought we’d share it with you!

We’re also working on another new song for our next performance – called ‘How Many Ways’. It’s a quiet reflective song with Larissa and Andy both on guitars accompanying Larissa’s vocals – simple, open and lovely it is a beautiful heartfelt song. There’s no advanced preview of this one and we’re looking forwards to revealing it to you soon…

Thanks for reading and watching … see you soon!